The main aims to:

GCN volunteers also raised £200 from the 'Taste The Trench Experience' that will go towards the next GCN project called Wars Out-Reach in Schools (W.O.R.S.).

These are not the droids you are looking for!

The main aims of our #TasteTheTrench event were to provide the general public with a visual representation of a WW1 Trench, with soldiers in uniform, who were on hand to explain what being in the Trench may have been like and the types of weaponry they would have had at their disposal. It was also to provide a broader education with regards to the forgotten or less reported aspects of WW1, such as the role women and ethnic minorities played in helping the allies win the war.

We also tried to mix reality with the humility to assist inspiring new generation to learn from the mistakes of the past conflicts.

All the wood needed to build the Trench and the shed attached to the Trench was donated by Cheltenham Fencing, who also loaned their transport vehicle, which was needed to move the mobile Trench to and from Gloucester City Centre. Graham and his staff have been very supportive of our WW1 ‘Taste The Trench’ for the last 16 months.

As in 2018 now in 2019 The Fairview Gardener Garden Centre & Tea Room assisted the 'Taste The Trench' Display with the use of their transportation for most of the Trench, Tentage, Camouflage Nets, and furniture. A very big THANK YOU to Glenn Satterthwaite, Paul Turner & Luke Newson for their help.

We have also had a great deal of support from Chris Evans at The Butterfly Garden where we have been able to extend the Trench whilst education Volunteers at the BFG about Trench Life and Uniforms.

This year we were able to expand upon what the Trench looked like and what was included inside. Volunteers Dan Fraser-Williams, Steve Fraser-Williams, Barry Duke, Patrick Meulbrouck, Rob Howells and Ray Pass manned the Trench, helping children and adults into WW1 Uniforms and taking them into the Trench for them to impart some of the history behind the Trench and what went on inside it, as well as for an opportunity to have a photo shoot.

As the organiser, Christopher Auker-Howlett, uses a wheelchair himself, the Trench had a ramp, which made it accessible to the less able bodied. A small suggested donation of £1 was asked for, for anyone wishing to enter the Trench wearing uniforms and having a ‘Taste The Trench’ experience, which will help fund the next major GCN project called Wars Out-Reach in Schools (W.O.R.S.), which will support schools with equipment and uniforms that support teachers in Historical Wars WW1 and WW2.

The mobile Taste the Trench experience

An additional Display included Tentage and Camouflage Nets on loan from Support Battalion, HQ ARRC based at Imjin Barracks, Innsworth.

These tents housed the WW1 Army Air Corps display manned by Dave Partridge and several of his colleagues also dressed in British and German uniforms of the Great War. Dave also brought several Weapons including the Vickers Machine Gun that was used in the ‘Taste The Trench’ display. Furthermore Mark Page was wearing French Infantry Uniform with additional WW1 equipment and uniforms. Mark was a great example of a fully loaded WW1 French Trench Soldier. 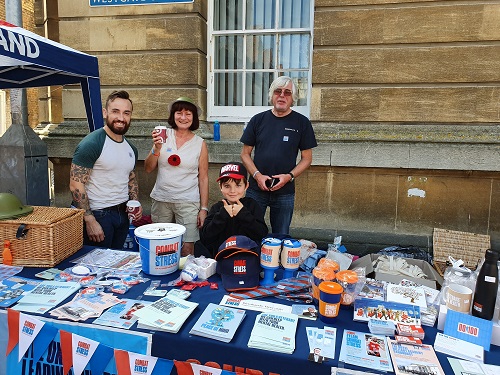 Alongside the Trench, GCN’s GLOS100 also had a ‘WW1 Field Hospital’, where Lynn Page and Zoe Allan had children’s activities such as Decorating / Camouflage papier machet helmets with colouring sheets of Hesen and First Aid skills were given out in the ‘Tommy The Teddy’ with first aid given out by Mike Hemming. 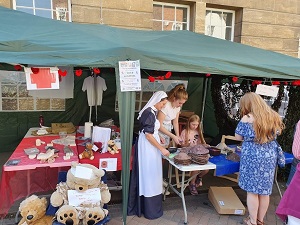 Tommy The Teddies being bandaged in the Field Hospital

GCN’s chosen charity this year is Combat Stress, due to this year being 100 years since the charity was founded (May 1919). A range of Combat Stress Merchandise and information about what Combat Stress is, and what services they are able to offer Veterans who are suffering with mental health issues were available, manned by GCN volunteers Marie, Dan and Alfie Bufton and GCN Trustees Janet & Gary Murden. Gary also did a sterling job of taking the lead of assembling / disassembling the Trench and doing a number of trips back and forth to collect and store the Trench.

Next to them, GCN Trustee Jill Davies set up an amazing Combat Stress Wine-bola, Gin-bola and regular Tombola where people could buy tickets to hopefully win a bottle of wine or gin (for the adults) and a range of other prizes for adults and children alike. All prizes were kindly donated by GCN members; the Gin was donated by a friend of GCN, Callie Stein.

The 'Taste The Trench' WW1 display is in need of reliable transport, e.g.,:,

to assist with the transportation of our Display Materials.

If you are able to offer any assistance, please contact Christopher Auker-Howlett.

Any help is greatly appreciated

Our Projects could not go ahead without the hours of dedication donated by our great group of GCN Volunteers. They have worked tirelessly, giving up their spare time and gifting their own money to help make this and other projects a reality. 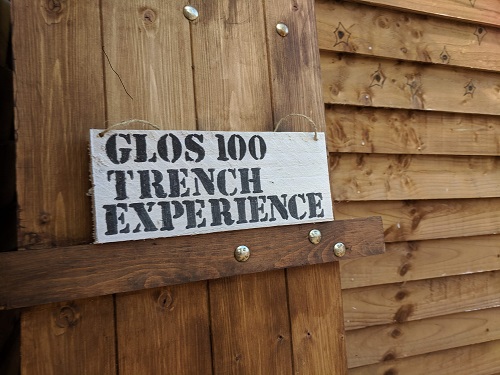 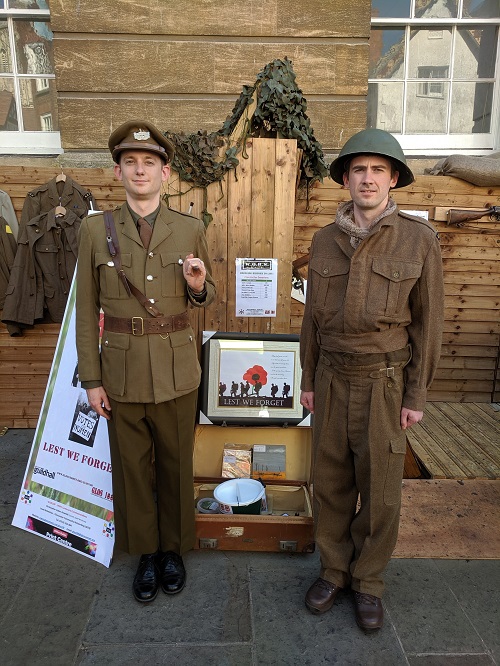 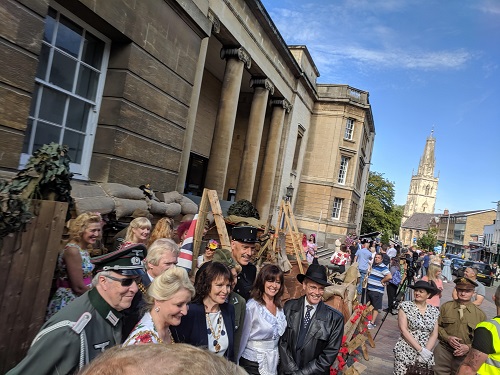 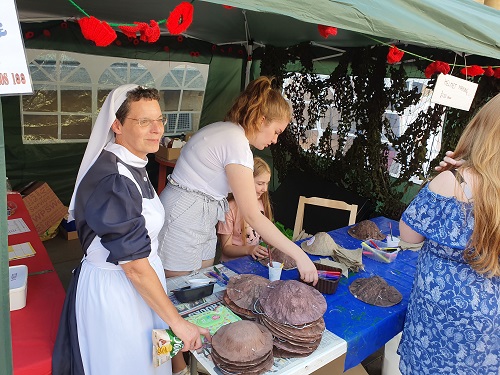 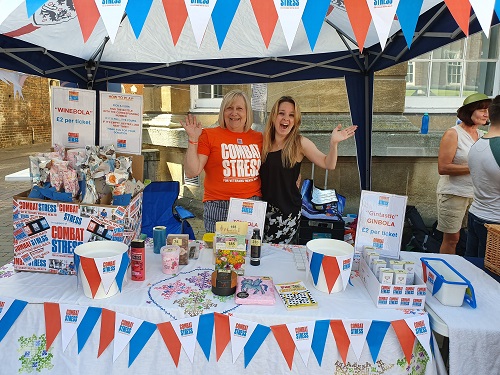 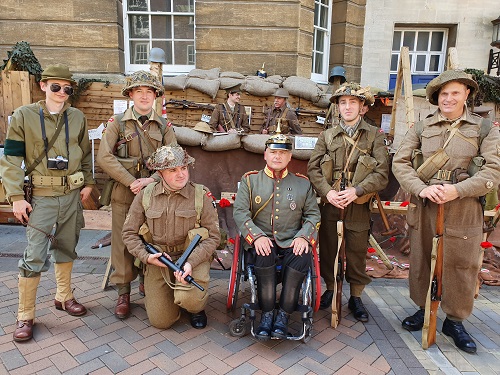 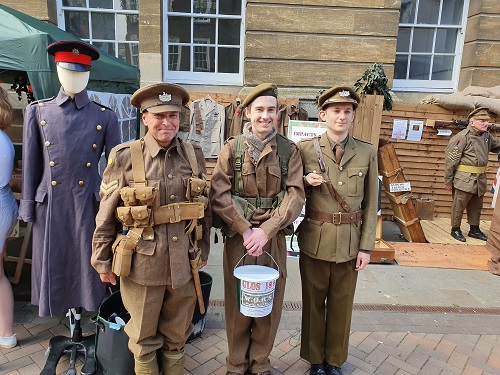 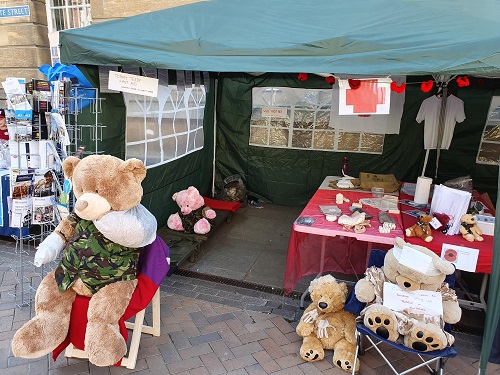 Steve and Dan Fraser-Williams at attention collecting donations to enter the Trench for the W.O.R.S. project 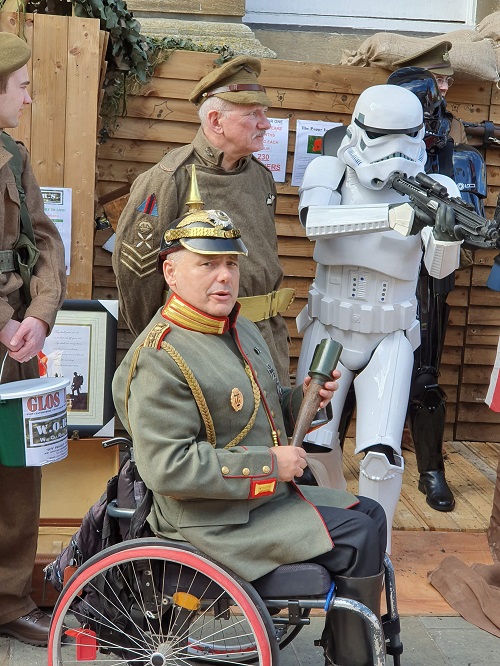 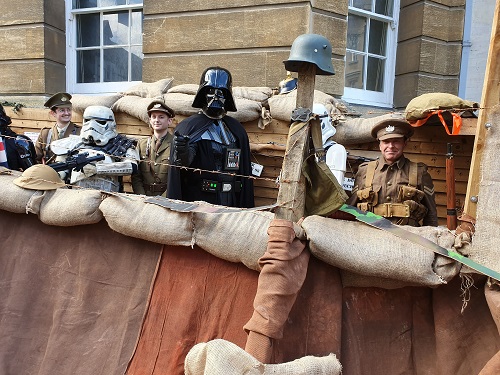 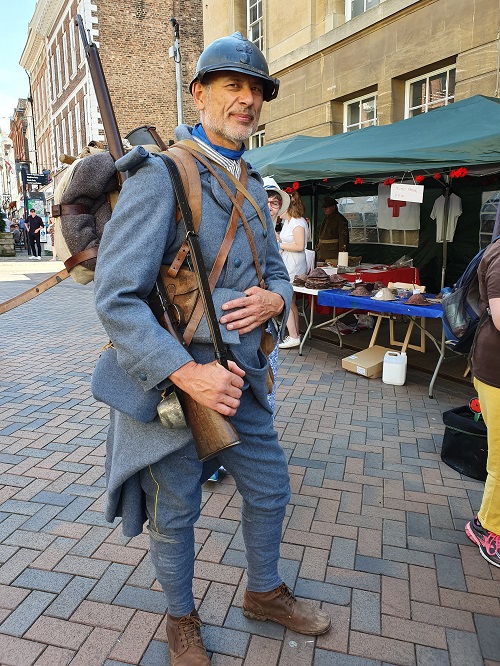 Teaching a New Recruit in the Trench - Read more... The Final Salute, an example of the folly of youth lost in the Great War