We managed to raise a total of £540.00 from the amazing generosity of those who attended this event!

Letter of Acknowledgement from Alabare

The WW1 Summer Charity Fete raised over £540 for the Ex Homeless Veterans which will be presented in early August 2018. Funding will be going to support the Veterans to access mental health and self development courses throughout the UK:

One such Veteran, ‘Mark’, gave over 60 Hours of his own time building the Trench and Artwork for the Graffiti Wall. He is attending a self development course aboard a Tall Ship in August 2018. There is equipment and clothing needed on this development course. If anyone can help with this, please contact me.

Mark's ‘Taste The Trench’ is a mobile, wooden trench, the majority of which was made from donations of wood materials from 'Cheltenham Fencing’. Other donations came from International Plywood Ltd (Innsworth Industrial estate) and ARRC HQ (Support Battalion). Graham, the Manager of Cheltenham Fencing, was extremely helpful in supporting this 'Taste The Trench’ concept with donations of fence panels, pallets and posts for the ‘mock barbed wire'.

Pictures on this page show the Trench, which was adapted to recreate the type of fortified trenches that Soldiers of Gloucestershire may have fought in 1914-1918.

The 'No Man’s Land' Graffiti Wall was jointly decorated by a local artist Tim, veterans from ‘Alabare’ and the local youth group from the GL3HUB Community Centre. Eight 8x4 foot Plywood Sheets were donated by International Plywood Ltd based in Innsworth Industrial Estate (see attached pictures).

Handmade Poppies were made by Young Children from the GL3HUB Youth Club, which were bought via donations and attached with messages, planted in front of the Graffiti Wall.

Also, a Senior Citizen who had been attending the Age UK service at the GL3HUB Community Centre made and decorated nearly 80 Love Hearts with these too being exchanged for donations and people could hang them on a ‘Burnt Tree’. The ‘Burnt Tree’ symbolises the trees shredded by shell fire in ‘No Man’s Land’ between the Trenches.

Additionally, Pottery Love Heart Jewellery, was made and sold by another Senior Citizen Lady ‘DOT’, who had attended the same Age Uk Group at the GL3HUB Community Centre.

A Mini Assault Course, was erected and competitions, with a dances through the tyres, crawling under the camoflauge net and finishing with a football range shootout.

Mixed Martial Arts, Junior Hockey and ‘Rugby Tots’ demonstrated throughout the day giving examples of the type of organisations people can expect at the GL3HUB Community Centre.

Mr Page and Mr Ridler (Gloucester WW1 Memorabilia Collector @ Upstairs Downstairs near the Gloucester Quays) both brought WW1 Uniforms and Memorabilia for people to chat to and learn about the life of those in the Great War. Especially Mr Page (teacher from Parton Mannor Junior School) who dressed in full French WW1 Uniform, in 28 degrees heat!

Corned Beef hash was cooked up by Alex and Karen in the GL3HUB Cafe (open every Mon-Sat 10am-2pm). Karen and her Support cook banged the pots with their helmets on to give out free tastes of Trench Corned Beef Cooking.

The Cake stall was staffed by Family and Friends of Trustees

It's further planned to transport the ‘Taste The Trench’ and 'No Man's Land’ Graffiti Wall displays on the following event:


On behalf of the GL3 Community HUB, the general public, the Veterans and some very generous local businesses, I would like to say ‘thank you’ to all the Companies and Individuals who made this day such a success! 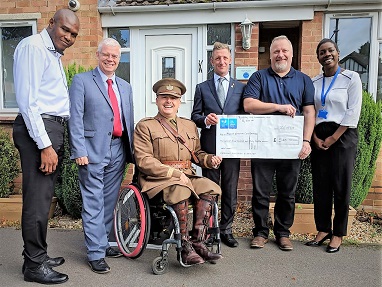