oh! what a lovely war!


2018 was a very significant one because it was exactly 100 years ago that the 'last year' of WW1 took place.


The main aims of this website is to bring together general information to the public and schools, creating a last resource of interesting WW1 related topics. Other aims are to raise awareness of the more obscure events that took place as well as to raise money for military Charities whenever possible (see our Events page) where we can include the people of Gloucestershire.

The Gloucestershire Regiment raised a total of 25 battalions and was awarded 72 Battle Honours, 4 Victoria Crosses and lost 8,100 men during the course of the war. These figures do not include RAF and Navy!

It felt only right to honour and commemorate the sacrifices given by the men and women (Role & Rights of Women) in WW1 of Gloucestershire and also to enlighten people of the sacrifices of those from around the British Empire and other Allied Countries.

This website will hope to promote both Aims and Events of 'GLOS100' and any other WW1 Commemoration events.

It will also pull together a wide and wealth of information & resources that all generations might learn from and enjoy both now and in the future.

This was the second year that Gloucester Community Networking (GCN) attended the Gloucester Goes Retro event, complete with WW1 Trench, with WW1 soldiers and weaponry, a WW1 Field Hospital, with children's activities and a merchanise and tombola stand both raising money for Combat Stress.

Full details of the event can be found on our Press Release page.

Chris talks to Dominic Cotter » about his volunteer work with Combat Stress », the GCN Taste The Trench » event and the GCN W.O.R.S. » Project 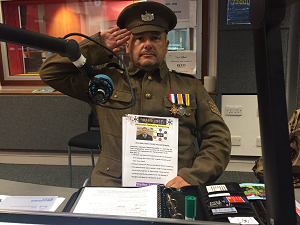 Francis George Miles was born in 1896 and lived in the village of Clearwell in the Forest of Dean. Like many of his generation; he left school at the age of 13 and went to work in the Princes Royal Company mines near his home. Aged 18 when war broke out, he was filled with patriotism and enlisted with his stepfather on 28 December 1914 in the 9th Battalion of the Gloucestershire Regiment.

Click on the image below to learn more about this incredibly couragous individual and to hear his story on the BBC Sounds Website.

Clearwell, Forest of Dean: Miner Who Became a VC Medalist

The Glos100 Taste the Trench event was held outside Shirehall in Westgate Street, Gloucester, on 25th August 2018, to raise money (£271.28) for Combat Stress, a charity that supports mental health with Veterans. See our Press Release for more information.

A group of school children at Witton Park High School in Lancashire are hand making poppies to raise money for Blesma. Each of the poppies represent men who left the local area for war - and never came home.

Wilfred Edward Salter Owen was born 18 March 1893 in Oswestry, Shropshire. After school he became a teaching assistant and in 1913 went to France for two years to work as a language tutor. He began writing poetry as a teenager.

Owen was an English poet whose work was characterised by his anger at the cruelty and waste of war, which he experienced during service on the Western Front. Learn more...